Throughout the voluminous collection, Montaigne is frequently unserious and pathologically self-aware——ever ready to undermine himself at the moment he appears pedagogical, or didactic. Instead, the essays display a consummate knowledge without pedantry or rigor; the author is erudite without being esoteric. But the essays are not bound by form, in as much as they repeatedly neglect any obligation for organization or procedure. It is a style that is completely internal, malleable and self-justifying. And because there is no imposed structure, the essays are less argumentative than exploratory, speculative while also avoiding relativism, committed but not systematic, and often severed at the moment Montaigne senses he is approaching a conclusion.

As readers, we are guided along the contours of the mind in motion, with the writer thinking and discovering as he writes. Here, style is epistemic, style is judgment, and it reflects the process of induction. Thus, a particular mode of argument it is not simply a demonstration of the how the writer thinks, but the arrival of knowledge itself. The sensation one feels in reading is like that of falling through a consciousness, unprepared and desperate to make sense of itself and the world, a process hideously and perpetually internal that is at once denigrating and self-flattering.

The rhythms of thought are not only depicted, they are captured. The register in this case is not only the recorded thought, but the moment of the thought itself, its pitch and delivery. Thoughts move forwards as well as backwards, or back in on themselves, or spiral away before being retrieved several pages later.

Montaigne catalogues his thoughts at the very moment at which they occur in attempt to clarify them——before he can distrust them, before he can become ashamed of himself——just as Hamlet uses the artifice of the play to produce a renewed moment in which to hold a sense of resolve muddled by prolonged contemplation.

Montaigne is a writer we can be sure Shakespeare had read and knew well. The essays contain a great deal of philosophy, but are not themselves a work of philosophy. Instead, we find in the essays a vocation liberated of the need to be right all the time. Simon de Beauvoir said that all philosophies had to be arrogant by virtue, because they sought to lay claim to something excessive: total possession of truth.

Dogma and intellectual rigidity are eschewed at every turn. And it is towards this conceitedness that many of the essays are counterposed. Across nearly every subject, Montaigne demonstrates a pathological agnosticism. His sense of doubt is pregnant and unceasing, both of himself and others——critical, but rarely affirming or denying anything outright. Yet, in spite of his legacy to skepticism there is in the essays a clear and utter want of solipsism.


The life of the skeptic is readily synonymous with that of the iconoclast. Yet occasionally the primacy of the former temperament has a tendency to get in the way of the dedication required for latter.

Montaigne, for all his agnosticism, was averse to the trending political and religious rebellions of his time. He opposed The Reformation on the grounds that it had thrown Europe into what would become a protracted and cyclical civil war. His inherent distrust of individual opinion also meant that the revisions of one person could never justify the renovation of an entire institution, nor were they fit alone to establish a new one——believing instead that extant authority was best fit to regulate itself.

But to accuse our author of contradiction is a truism. Organized religion, however, receives a much different treatment. He could not make a mite, and he makes gods by the dozen. At a time when atheism was intellectually unattainable and any public display of irreligion meant persecution or death, it is tempting mostly for the satisfaction of those of us in the club to want to assume more about levels of unbelief in those who were obvious suspects.

A Magazine of Literature and the Arts

We can be confident enough though in saying that he was in all likelihood a Deist, or at the very least, a member of a new Christianity bastardized by Pagan thought. But Faith is a different matter. That reason could be used as a defense in the name of faith——doubt as a qualifier for credulity——is to us an anachronism of the mind.

The question of whether or not this is reconcilable is the subject of the Apology. In the end we are presented with a case for doubt as act of humility in the face of a higher intelligence——that is, the intelligence of the Creator, which, Montaigne maintains, is not accessible through reason or everyday experience. To be certain of anything else is extreme arrogance. To doubt oneself is necessary; to doubt God is folly. Thus, it is equally a statement of terminal credulity.

It is also the most flippant. To write about vanity, says Montaigne, is the greatest vanity of all——a product of the needless proliferation of opinions and commentaries, which is a mark of decadence routinely mistaken for enlightenment.

One only needs to spend an hour with social media or the twenty-four hour news cycle to feel the truth of this. Writing in a time of cruel sectarian violence , Montaigne is unconvinced by the ageless claim that having a dogmatic faith is necessary or especially effective in assisting people to love their neighbours :. Between ourselves, I have ever observed supercelestial opinions and subterranean manners to be of singular accord ….

This scepticism applies as much to the pagan ideal of a perfected philosophical sage as it does to theological speculations. Even virtue can become vicious, these essays imply, unless we know how to moderate our own presumptions. If there is one form of argument Montaigne uses most often, it is the sceptical argument drawing on the disagreement amongst even the wisest authorities. If human beings could know if, say, the soul was immortal, with or without the body, or dissolved when we die … then the wisest people would all have come to the same conclusions by now, the argument goes.

It points the way to a new kind of solution, and could in fact enlighten us. Documenting such manifold differences between customs and opinions is, for him, an education in humility :. Manners and opinions contrary to mine do not so much displease as instruct me; nor so much make me proud as they humble me.

We are horrified at the prospect of eating our ancestors. A very great deal , is the answer. As he writes :. I have known in my time a hundred artisans, a hundred labourers, wiser and more happy than the rectors of the university, and whom I had much rather have resembled. By the end of the Essays, Montaigne has begun openly to suggest that, if tranquillity, constancy, bravery, and honour are the goals the wise hold up for us, they can all be seen in much greater abundance amongst the salt of the earth than amongst the rich and famous:.

And so we arrive with these last Essays at a sentiment better known today from another philosopher, Friedrich Nietzsche, the author of A Gay Science It was Voltaire, again, who said that life is a tragedy for those who feel, and a comedy for those who think. Montaigne adopts and admires the comic perspective. It is not of much use to go upon stilts , for, when upon stilts, we must still walk with our legs; and when seated upon the most elevated throne in the world, we are still perched on our own bums. Do editors pander to audiences more than they should? Polly Curtis on the future of journalism — Dundee, Dundee City. 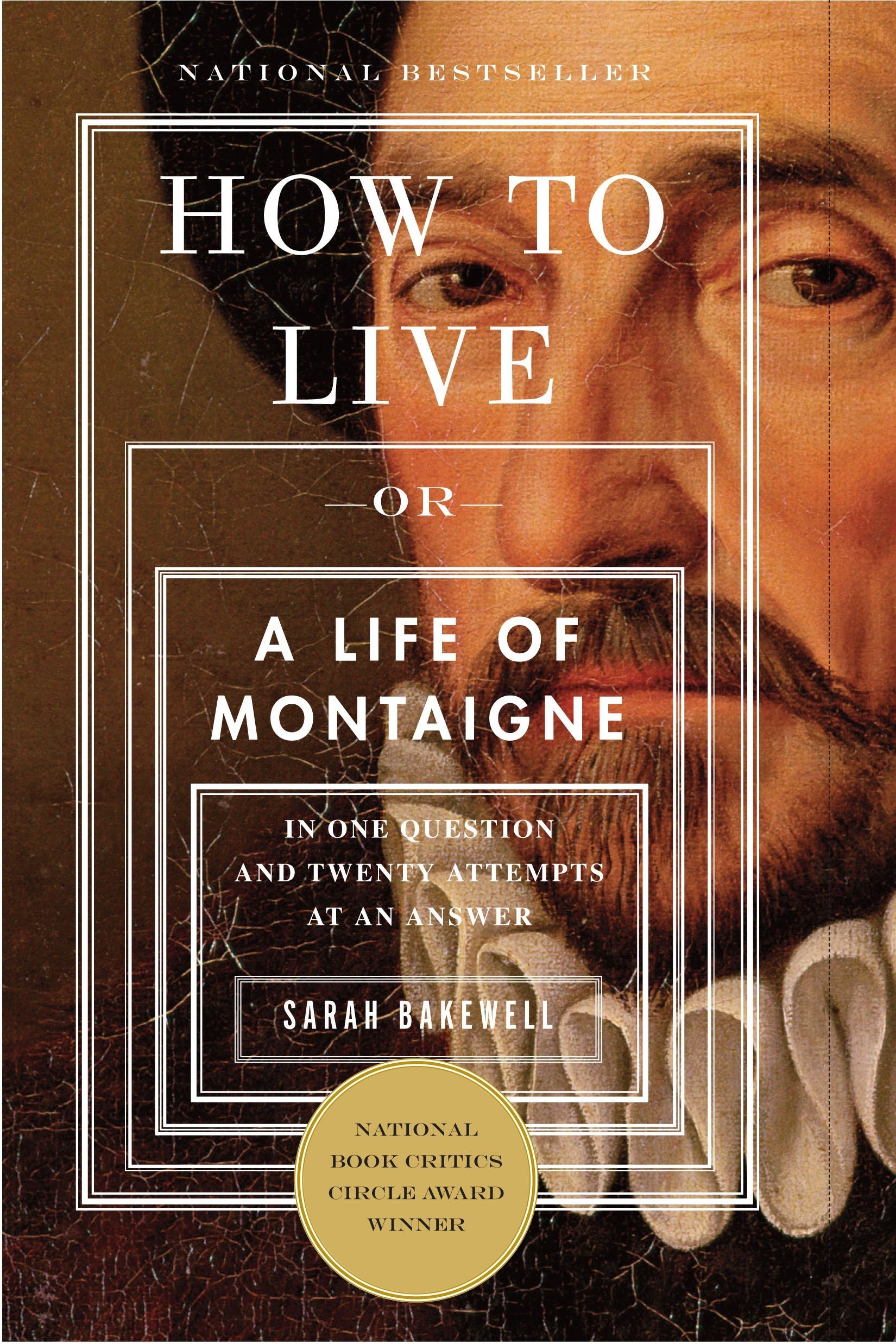 The Maldon UP! Edition: Available editions United Kingdom. Montaigne: his free-ranging essays were almost scandalous in their day. Matthew Sharpe , Deakin University. But the message of this latter essay is, quite simply, that non, je ne regrette rien , as a more recent French icon sang: Were I to live my life over again, I should live it just as I have lived it; I neither complain of the past, nor do I fear the future; and if I am not much deceived, I am the same within that I am without … I have seen the grass, the blossom, and the fruit, and now see the withering; happily, however, because naturally.

Sarah Bakewell. Did Montaigne turn to the Stoic school of philosophy to deal with the horrors of war? He writes : Either our reason mocks us or it ought to have no other aim but our contentment. Indeed: We are great fools. Montaigne revered the wisdom of Socrates. Michel de Montaigne. Writing in a time of cruel sectarian violence , Montaigne is unconvinced by the ageless claim that having a dogmatic faith is necessary or especially effective in assisting people to love their neighbours : Between ourselves, I have ever observed supercelestial opinions and subterranean manners to be of singular accord … This scepticism applies as much to the pagan ideal of a perfected philosophical sage as it does to theological speculations.

Of cannibals and cruelties If there is one form of argument Montaigne uses most often, it is the sceptical argument drawing on the disagreement amongst even the wisest authorities. Documenting such manifold differences between customs and opinions is, for him, an education in humility : Manners and opinions contrary to mine do not so much displease as instruct me; nor so much make me proud as they humble me. As he writes : I have known in my time a hundred artisans, a hundred labourers, wiser and more happy than the rectors of the university, and whom I had much rather have resembled.